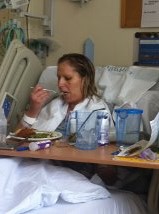 So on each cycle of chemo I would lose my appetite and have to really battle to get it back again.  It is so hard to have to build yourself up over and over again!  Like when you have had a really bad sickness bug, you don’t want to let anything pass your lips, not even water!  I was even paranoid about drinking water, so much so that I would end up on a drip as I was so dehydrated!  In fact when they told me they were putting up a drip to rehydrate me I would be relieved as it meant I wouldn’t have to drink anything…crazy!

I was so weak and ill that my husband and sister had to spoon feed me Weetabix or Ambrosia Rice yoghurt’s!  My sister in law would pop to the local supermarket and get anything she thought I might eat.  I know now they were so worried about me but at the time I didn’t realise.

I would get really anxious when it was getting near to meal times, we spend whole lives being conditioned into eating meals three times a day, it’s surprising how ingrained this is!!  My mum pointed out that I just needed to eat little and often, when I wanted to and not at my perceived normal meal times!  I tried to keep this in mind, it did help!

Also because I knew I was really vulnerable to infections and that they can be really dangerous I was paranoid about germs in food!  I was advised to avoid some foods altogether, this just reinforced my dislike of eating!

When I came out of hospital after the first cycle I was in bed for a couple of days feeling so rough, my husband even said that he thought I would be better off back in hospital.  This really upset me but he was so worried!  We contacted the hospital and the registrar changed my anti sickness meds and I started to feel a little better.  The first thing I fancied eating was a fish finger sandwich which my husband happily made for me!

I would live on Ready Break or Weetabix, I just gulped it down without tasting it.  Once I sat staring at one Weetabix in a bowl for half an hour psyching myself up to eat it!  I knew I had to eat and got paranoid that if I didn’t eat I would die but I still couldn’t put it in my mouth!

After the second cycle, when I came home for a week all I would eat was ham, egg and chips!  We went for a takeaway at my sisters once and she had to make it for me!  When we went out for meal to celebrate my birthday we had to ask the chef to make it too!  Another time it was chicken chow mein and before that mash potato, gravy and yorkshire pudding!  I know….random!

Whenever I had a sudden craving for something my family would rush out and get it for me!  One of these was for the foamy shrimps and banana sweets.  My Dad would regularly buy these for me and luckily they had them in the hospital shop!  I also liked leek and potato soup at one point, it always had to be the same brand as I’d become so fussy, when I found something I liked I was too scared to change anything!

I also lived on these build up drinks, Fresubin Energy and Fresubin Juicy, I would have it with lots of ice and a straw…yeah…cancer’s cocktail!!!  A lot of people don’t like them but I ended up enjoying them!  I first discovered it with ice when the nurses on the ward suggested it, I was well impressed that I could have ice in hospital.  A couple of times they put ice cream in it and that was quite nice! When I was at home I didn’t go anywhere without my sports bottle with Fresubin and Ice in…it got to the point when I was neurotic about it!  Then my husband and daughter started to make sure I’d always got one with me too!!  Crazy the things you get obsessed with!

I never thought in a million years that food would become my enemy!

I M O G E N ❤️ 🦋 #daughter #mychild #shessolovely #myworld #minime #mylife #myfamily #blackandwhite #butterflies
💔✨ 🐈 🐱 Tilly 😿
When we had our red carpet moment ... kind of 🤷🏻‍♀️ shame our train had been delayed by an hour so we’d had no time to get ready... urgh 🤦🏼‍♀️... #recentevent #whatwedid #ambassador #advocacy #survivor
Last night ... another great evening ☺️ (photo thanks to @emdawson73 😘) thanks Paul & @saraminimyrt for delicious food & flowing 🍾🍷🥂🍻 ❤️ ‘The Lost Weekend’ continues....
A nod to the cyclist in our house🏠🎄🚴 #christmasdecorations #xmas2019 #ourhouse #cyclist
Private Box at @royalalberthall for the @bloodwise Christmas with the Stars 🌟🎄🌟 #royalalberthall #bloodwisechristmas #christmas #christmascarols #singingcarols #festiveseason